Visual Art played an effective role as a tool to reach the public on the importance of the suffrage movement. The art and ephemera created during the suffrage movement visually captured the public sentiment and addressed the conditions of inequality towards women that needed to be changed, while doing so in a socially acceptable manner of the times.

The sash was a piece of fabric worn from the shoulder to the hip of suffragists that would march in parade formation down city streets and in protest. The "Votes for Women" sash would become the emblematic symbol of choice worn by suffragists to make a political statement and that would historically represent the movement. This sash belonged to and was worn by Mary Ellen Ewing.

Votes For Women, I want to speak for myself at the polls, 1915

During the suffrage movement, different suffrage groups created visual propaganda postcards to sway public sentiment in favor of women's suffrage. The inscription on the back reads "Does this remind you of Marian." It was sent to Minnie Fisher Cunningham.

This postcard from the National Woman Suffrage Publishing Co. Inc counters the idea that giving women the right to vote will "unsex" them or, in other words, become more masculine.

This piece from The Women's Citizen provides a compilation of political cartoons in favor of suffrage from periodicals across the country. 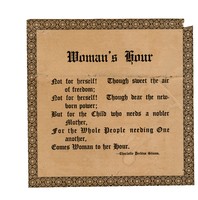 Political cartoons and postcards were not the only way people used art to show support for women's suffrage. There were many songs and poems that were also used to persuade people. This poem "Woman's Hour" by Charlotte Perkins Gilman is one of them. In this piece, Gilman says that women don't need suffrage for themselves but in order to help others.