Legacy of the Vote

The passage of the 19th Amendment was not the end of the women’s movement for equality but only the beginning. In the decades to follow, the reverberations of what the women’s suffrage movement started would mobilize millions of women to strive for equality in all aspects of American life. During the Feminist movements of the 1960s and 70s, women would advocate for increased job opportunities, equal pay, and representation in sports, childcare, and reproductive rights. Women increasingly ran for and won political office to improve not only government but issues that affected their individual lives. 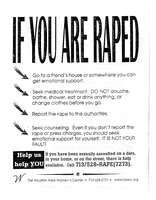 This handout from the Houston Area Women's Center gives specific steps and advice on what to do if someone is raped, where to seek help and counseling, and offers their assistance and contact information in the issue. The flier also provides information on date rape drugs and what to do to protect yourself at parties and social gatherings.

The Fight for Women's Rights pamphlet, circa 1976

This campaign brochure from the Socialist Workers Campaign shows how different movements supporting the women's movement have been denied by the current capitalist and political structures of the United States. In combating this inequality the brochure calls for participants to join the socialist movement and to elect socialist candidates Peter Camejo and Willie Mae Reid for President and Vice President of the United States.

A pamphlet published from the Texas Federation of Business and Professional Women's Clubs. The pamphlet underscores how women are not treated as people under Texas Laws and provides facts to dispel many of the claims that opponents of the Equal Rights Amendment spread against its passage.

This document advertises the services that Planned Parenthood offers to newly married couples. In particular, this piece describes how the organization can help with family planning, using the metaphor that family planning involves careful planning and consideration much like building a home of your dreams. 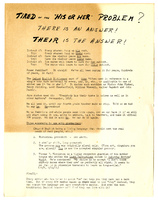 Tired of the "His or Her" Problem?, undated

This document provides that the use of a gender neutral pronoun such as "their" is the answer to avoid the historical conundrum of using only "his" or "her" at the exclusion of others. Their is inclusive of both genders, and although the document may not have anticipated the future it seems to be a forerunner to the use of their, they, or them as non-binary terms currently used within the LGBTQ+ community. 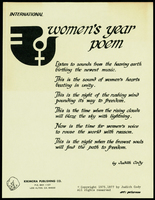 Penned by national award winning poet, Judith Cody, for the first International Women's Conference the poem has been inducted into the Smithsonian Institution's National Museum of American History. Within the poem she uses the elemental forces of earth, wind, clouds, and lightning, as visual metaphors to convey the power and urgency for women's equality and freedom.