The issue of women’s suffrage has been a hotly debated topic, and its passage was deemed to have been long overdue in the United States from its advocates. Through postcards, articles, and maps, illustrators have conveyed how suffrage can take hold within a region and spread geographically all across the nation if given a chance.

"Votes for Women a Success, North America Proves It," 1917

"The Whole World For Women Suffrage and the United States Senate lags behind!" The Women Citizen, December 14, 1918

An American weekly periodical, The Woman Citizen, published this collection of articles showing how different countries around the world supported women's suffrage to motivate the United States Senate to action. 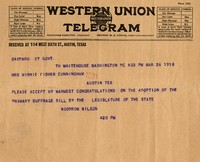 In this congratulatory telegram from President Woodrow Wilson to Minnie Fisher Cunningham, he congratulates her on her work that led to the adoption of the 19th Amendment by the Texas Legislature.

This flier documents the progress and proliferation of suffrage from 1869, when Wyoming became the first state to grant women suffrage on equal terms to men, to 1917 with 12 states giving women equal suffrage.