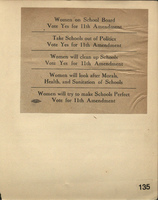 Why Women Wanted the Vote

Fliers were an important medium that were easily distributed and posted in prominent locations within local communities to grab attention, inform, and advocate on the merits of issues such as women’s right to vote.

This flier urges people to vote yes for the 11th amendment to pave the way to having women on the Houston school board. For activist Mary Ewing this fight acted as an extension to the fight for suffrage.

Why Women Want to Vote, Women are Citizens and Wish to do their Civic Duty, 1917

This flier shows why women from different backgrounds all need the right to vote. The flier was also meant as an appeal to men to have them support suffrage for women. These fliers were distributed by the National Woman Suffrage Publishing Company Inc.

This flier provides a list of reasons why women should vote and points out why their roles in society prove their vote is important. Fliers such as these were distributed by the National Woman Suffrage Publishing Company Inc.