In the months prior to the Japanese bombing of Pearl Harbor, the men of the Houston were preparing for the approaching war with constant drilling. Although the ship was in need of major upgrades, her crew was ready and eager to fight for their country. When warnings of imminent Japanese aggression reached Captain Albert H. Rooks on November 27, 1941, the ship was undergoing some repairs at the Cavite Naval Yard in the Philippines. Within 24 hours, the crew had the ship buttoned up and headed to the central Philippines, where on Dec. 8, 1941, they learned of the outbreak of hostilities with Japan.

The Houston spent the next several weeks escorting convoys between the Netherlands East Indies and Australia. In January 1942 the Houston and the rest of the Allied fleet were united as a multi-national American-British-Dutch-Australian (ABDA) force, originally under the command of Admiral Thomas Hart, USN. An ABDA Combined Striking Force was under the command of Rear Admiral Kerel Doorman of the Royal Netherlands Navy. The ABDA ships were outdated and communication between the ships was poor, putting them at a disadvantage when compared to the modern ships and seasoned crews of the Japanese fleet. 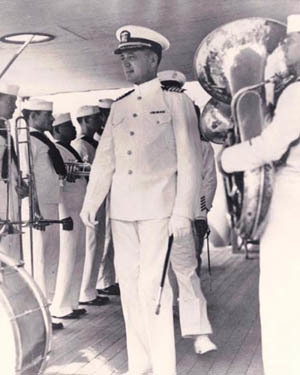 Captain Albert H. Rooks commanded the USS Houston during the Battle of Sunda Strait. He was awarded several medals posthumously, including the Congressional Medal of Honor and the Netherlands' Cross of the Bronze Lion. Gift of USS Houston Survivors Association.

On February 4th, a group of ABDA ships attempted to intercept a Japanese force in the Makassar Straits, but were attacked in the Flores Sea. Over fifty Japanese bombers lit into the Houston and the USS Marblehead (CL-12), which were unprotected by air support and handicapped by defective 5" anti-aircraft shells aboard the Houston. Captain Rooks skillfully maneuvered the Houston for some two hours, but in the final wave of attacks an errant heavy bomb landed next to her rear 8-inch gun turret, destroying it while killing 48 men and injuring 20 others. Returning to Tjilatjap, Java, the crew of the Houston buried their dead.

On February 15, the Houston was accompanying a convoy of American and Australian ships from Darwin, Australia to Timor when Japanese aircraft attacked again. Under Captain Rooks' inspired direction, and utilizing fresh ammunition, the Houston circled the ships while steadily firing at the Japanese, and managed to escort the convoy safely back to Darwin. Although the convoy was safe under the Houston's guardianship, on February 19 the Japanese Striking Force launched a massive air attack, sinking nearly every ship in Darwin harbor, including many of those the Houston had protected.

A week later, in an attempt to prevent further Japanese landings in the Netherlands East Indies, a fleet of ABDA ships set out in search of a Japanese task force that was advancing on eastern Java. On February 27, the ABDA fleet caught up with the Japanese force for the first major surface battle of the Pacific War, the Battle of the Java Sea. In an eight-hour engagement, the Japanese inflicted a devastating defeat against the ABDA ships, sinking or fatally crippling the Dutch cruisers H.M. de Ruyter and H.M. Java, and three destroyers. Although the Houston was hit twice by Japanese 8" shells, she and the Australian light cruiser HMAS Perth both survived the fierce battle. 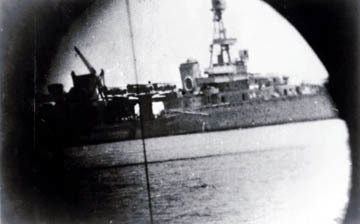 This photo was taken through the sight of an Allied gun, just days before the Battle of Sunda Strait. It is the last known photo taken of the USS Houston before its sinking on March 1, 1942. Gift of Betty Batchelor Miles.

On February 28, the Houston and the Perth proceeded to the port of Batavia in western Java, and partially refueled before attempting that night to pass through Sunda Strait in an effort to reach the safer waters of the Indian Ocean. As they approached the entrance to the strait near midnight, they unexpectedly encountered a Japanese covering force of nearly one dozen destroyers, three cruisers, and numerous torpedo boats and minesweepers that were protecting the invasion fleet. In the ensuing Battle of Sunda Strait, the Houston and Perth both aggressively fired at the attacking Japanese ships at close range, but, outnumbered and outgunned, they were no match for the enemy forces that completely surrounded them. Four torpedoes sealed the fate of the Perth shortly after midnight. Soon after, the first torpedo struck the Houston, and another Japanese shell destroyed her number two eight-inch turret, at which point Captain Rooks gave the order to abandon ship.

Tragically, one of the incoming Japanese shells struck a gun mount, killing Captain Rooks. The abandon ship order was countermanded and the Houston continued to fight, now alone against the Japanese fleet. She managed to hit three destroyers and sink a minesweeper before three more torpedoes ripped into the ship.

Hit by four torpedoes and listing to starboard, the Houston was doomed. The Japanese turned on their searchlights and continued to blast the ship. Captain Rooks and the majority of the crew were already dead. As a second order was given to abandon ship, the remaining crew members jumped over the sides, then began swimming furiously away from the suction of the sinking ship.

In the water, Japanese torpedo boats were machine gunning escaping sailors. Those who could avoid the gunfire began swimming through the dark, oil-coated water towards the Java shore, many miles away. Terrible as the experience of the last few days had been, their ordeal was just beginning.

Sailors relax at the Marine Barracks of Cavite Naval Yard, in the Philippines. The Houston was undergoing repairs at Cavite when she got the call to prepare for war following the bombing of Pearl Harbor. Gift of John Reas.

The Australian cruiser HMAS Perth went down just before the Houston on the night of February 28, 1942. The two Allied ships were attempting to make it to safety when they were surprised by a Japanese fleet in Sunda Strait. Gift of William A. Bernrieder.

This headline appeared in the Los Angeles Evening Herald and Express on March 14, 1942. The article reported that the USS Houston had not been heard from since heading for the Sunda Strait the night of February 28th. Gift of Mrs. Jack (Doris) Smith. 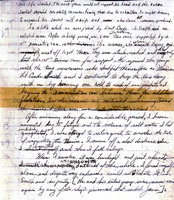 In handwritten notes, Communications Officer H.A. Levitt describes his experiences swimming to shore after the sinking of the Houston off the Java coast. Gift of Marvin E. Robinson.