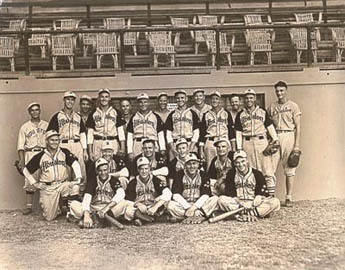 The USS Houston's baseball team "the Ramblers" played against crew members from other ships in their division. Gift of John B. Stefanek.

From her launching in 1929, the USS Houston (CA-30) was home to thousands of sailors, officers, marines, and dignitaries. In many ways, the ship resembled a floating city. She boasted a barber shop, post office, library, notion store, general store, clothing store, print shop, soda fountain, laundry, telephone exchange, and telegraph office. A power plant provided electricity, and a distilling plant converted sea water to fresh water. The ship even printed its own newspaper, the Blue Bonnet, which featured news articles about events on the ship, sports coverage for the ship's teams, naval trivia, gossip, jokes, and occasional short stories.

To combat the monotony of life at sea, the crew watched movies, such as the latest from Laurel and Hardy, or Cary Grant and Katherine Hepburn in The Philadelphia Story. New books were available in the ship's library, including John Steinbeck's controversial The Grapes of Wrath, and the latest Westerns and adventure stories. The men developed a craze for bridge to pass the time, and on one occasion held a pie-eating contest on the quarter deck.

Life at port offered more entertainment. Movies, golf, and fishing were available, and exotic ports like Honolulu and Shanghai offered a chance for sightseeing. At home port in Long Beach the USS Houston sometimes held dances, featuring the ship's own Scouting Force band, where Houston men and their dates could show off their jitterbugging talents. Most foreign ports offered seductive nightlife; in Manila, a sailor could find dancing partners at Santa Ana's Cabaret, or earn a certificate by drinking eight Singapore Slings at the Silver Dollar.

Competitive sports were another part of daily life for the crew of the Houston. Crew members regularly participated in baseball and basketball games, rowing, sailing, boxing, and wrestling. Less frequent competitive activities included tennis, bowling, swimming, and rifle matches. The Houston men's competitors were usually crew members from the other cruisers in their division, including the Pensacola, Indianapolis, and Northampton. Taking their own well-traveled ship's nickname, the baseball team called themselves the Houston Ramblers.

An annual tradition on board ship was the Christmas Party that the men of the Houston threw for underprivileged children and the children of crew members. The children enjoyed a Christmas dinner of turkey, cranberry sauce, and pie, and then a visit from Santa Claus, who delivered a toy and new clothing to each child. At the 1936 party, the generous Houston crew members received a gift themselves -- a new stand-up piano given to the ship by the city of Houston.

Another tradition, one not shared by landlubbers, was the Crossing the Line Ceremony. Naval tradition required that any sailors crossing the Equator for the first time pay their respects to King Neptune. To prove themselves worthy of King Neptune's mercy, the "pollywogs" had to pass the trials set before them by King Neptune's Court. After successfully enduring such indignities as the gauntlet, the stocks, the coffin, the barber chair, or the water tank, the pollywogs could be declared sons of Neptune, and henceforth consider themselves seasoned "shellbacks."

Santa Claus, assisted by Mickey Mouse, passes out gifts at the Children's Christmas Party in 1936. Gift of William A. Bernrieder. 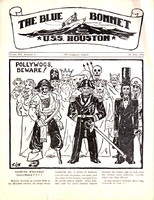 The ship's newspaper, the Blue Bonnet, contained news of the ship, upcoming events, naval lore, and other things of interest to the ship's crew. Gift of William A. Bernrieder. 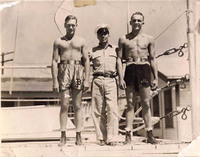 The USS Houston passes in front of the San Jacinto Monument on one of the ship's visits to her honorary home port of Houston. Gift of William A. Bernrieder.