According to founder Otto Schwarz,

"The USS Houston (CA-30) Survivors Association came into being as a result of a casual conversation between my wife and I. Sometime in 1948, while speaking to my wife, I expressed sadness that the crew of the USS Houston had served in peace time together, fought a war together, were sunk and became prisoners of war for three and a half years together, and yet were scattered all over the world and would apparently never be in touch with each other again. My wife replied with a simple challenge: "Why don't you do something about that?'"

Schwarz took her challenge seriously, and contacted the six crew members whose names and addresses he had brought home with him from prison camp. He asked them to respond, and to help him locate the rest of the 288 survivors. The task was challenging, as many of the survivors were still on active duty with the Navy and scattered around the world. But Schwarz persevered, and over the next twenty years, managed to locate every single one. 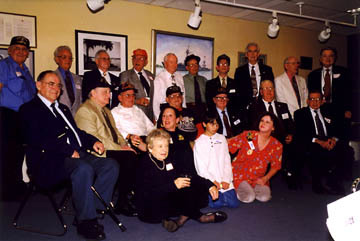 Schwarz began writing and circulating a quarterly newsletter for the network of survivors, named the Blue Bonnet after the original ship's newsletter. The survivors also continued to keep in touch by attending annual reunions every August with their friends from the Lost Battalion.

As the Blue Bonnet's circulation grew, mail began arriving in Schwarz's mailbox from the families of those who had died on the Houston or in the prison camps, seeking information about what had happened to their loved ones. Often Schwarz was able to connect these "next of kin" families with survivors who had known their brother or son and could provide the kind of personal information they wanted. "Witnessing the joy of these families was indescribable," Schwarz recalls, "and drove me to devote my life to the memory of the USS Houston, her crew, and their families."

The USS Houston Survivors Association has done much over the past five decades to preserve the memory of the ship and honor the lives of her crew. The members collected historically valuable documents and memorabilia about the USS Houston, which they donated to the University of Houston Libraries. In 1981, thanks to the generosity of George R. Brown, the Cruiser Houston Memorial Room was dedicated in the M.D. Anderson Library. Seventeen survivors, Harold Rooks (the son of Captain Rooks), and William A. Bernrieder of the Cruiser Houston Committee were in attendance. The room contains a permanent exhibit of documents and memorabilia about the ship and her crew. 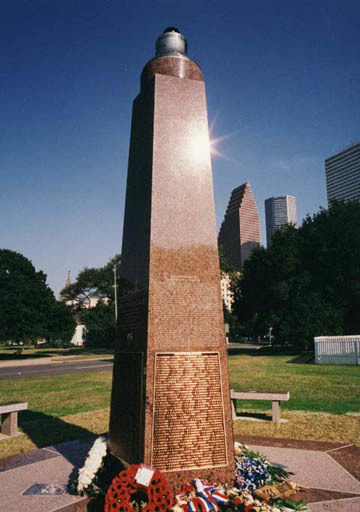 The USS Houston Foundation of the Texas Commandery of the Naval Order of the United States dedicated this monument to the USS Houston and her crew in 1995. The monument is located in Sam Houston Park in downtown Houston. Gift of Captain Carter Conlin.

Also in 1981, a group of survivors made a trip back to Asia and Australia, to revisit the scenes of their harrowing wartime experiences, and lay memorial wreaths in the Sunda Strait. A group of 45 survivors and family members visited the Bridge on the River Kwai in Thailand and the Changi Prison in Singapore. In Jakarta, Indonesia (formerly Batavia), the group stayed at a luxury hotel built on the exact site of Bicycle Camp. In Indonesia they also toured the Serang Jail and Serang Theater, which was still operating as a movie theater. As the climax of their journey, the group set two wreaths afloat and sprinkled white flower petals on the open water of Sunda Strait in memory of those "who still stand watch."

The USS Houston Survivors Association placed plaques and monuments in honor of their lost crew members at the Admiral Nimitz Museum in Fredricksburg, Texas, the Arlington National Cemetery, and the National Memorial Cemetery of the Pacific in Honolulu (in cooperation with the Lost Battalion Association). In 1995, members of the Texas Commandery of the Naval Order of the United States dedicated a beautiful monument to the USS Houston and her crew, capped by the ship's bell, in downtown Houston. Every year since then, as many as two hundred members of the Survivors Association have met at the monument on the Saturday nearest March 1st for a memorial service to honor their lost crew members.

Today the USS Houston Survivors Association/Next Generations is overseen by a Board of Managers, whose members include John Schwarz, Sue Kreutzer, Pam Foster, Jo Klenk, Jane Matthews, and Dana Charles, all children of Houston survivors. They continue to publish the Blue Bonnet, organize an annual reunion and memorial service, and oversee the USS Houston CA-30 Scholarship Fund. For more information about their activities, please visit the USS Houston (CA-30) website or e-mail contact@usshouston.org.

The heart and soul behind the USS Houston Survivors Association, Otto Schwarz told the story of the USS Houston and kept the survivors and their families in touch for over 60 years. Gift of Mrs. Otto (Gertrude) Schwarz.

Members of the USS Houston Survivors Association view a model of the Cruiser Houston on display in the George R. Brown room at a reunion in 1985. Gift of Otto Schwarz.

William A. Bernrieder (left) and Albert Rooks stand beside a bell from the USS Houston that was removed from the ship before the war due to a crack. Bernrieder was a member of the original Cruiser Houston Committee, and Albert Rooks was the son of Captain Rooks. Photograph by Captain Carter Conlin. Gift of Otto Schwarz.