Of the 1068 crew members on the USS Houston, 368 survived the sinking of the ship and the hours-long swim to the shore of Java. Upon reaching shore, many of the men immediately found themselves prisoners of the Japanese. Others made contact with the natives of Java, who alerted the Japanese to the sailors' presence. Once in the hands of the Japanese, the men of the USS Houston began a life of primitive hardships and brutal treatment that would last for three and a half years.

Following the weeks of fighting and the ordeal in the water, the men were exhausted and hungry, many of them covered in oil from the ship. Some were very badly burned. Groups of captives were marched and forced to endure "bashings" from the Japanese, who used their rifle butts to keep the men moving. The Japanese took their American prisoners to the town of Serang, where they spent a week crowded into the local theater along with Australian and Dutch prisoners, with little food and no medical treatment, before being moved to the local jail, where conditions were equally bad. 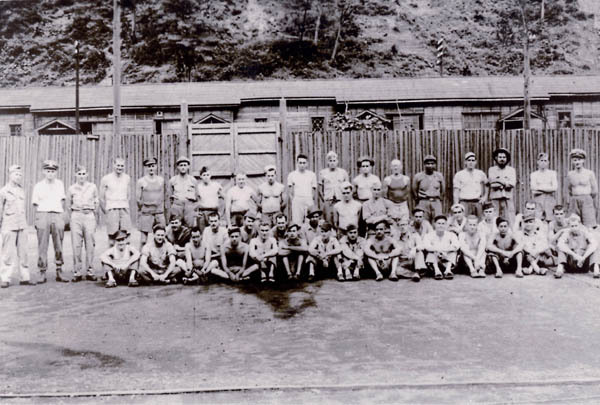 Prisoners of war in a POW camp near Ohasi, Japan. The prisoners include a dozen men from the USS Houston, several Americans from the 131st Field Artillery, and Australians from the Australian Imperial Forces and the HMAS Perth. Gift of Henry Thew.

In April 1942, most of the men were transported to "Bicycle Camp" in Batavia. Bicycle Camp, which had been the quarters for the Tenth Battalion Bicycle Force of the Netherlands East Indies Army, offered the POWs the best conditions they would experience as prisoners-of-war. The men had access to showers and running water, and were housed three to a room in barracks with cement floors. In Bicycle Camp, the men of the USS Houston were joined by troops from the 2nd Battalion, 131st Field Artillery, a National Guard unit from Texas dubbed "the Lost Battalion" because their whereabouts were unknown during World War II.

In October, the majority of the POWs were taken from Bicycle Camp to Singapore, while the rest were sent to work in various camps throughout Asia. This journey to Singapore was one of the most horrific experiences of their captivity, as men were jammed into the holds of rusty old freighters such as the Dai Nichi Maru. The POWs spent several days and nights on these "hell ships" with no room to move and barely any rice to eat, amid men who were now sick with dysentery. Upon arriving, the men spent several weeks at Changi Camp before taking another hell ship to their ultimate destination in Moulmein, Burma. 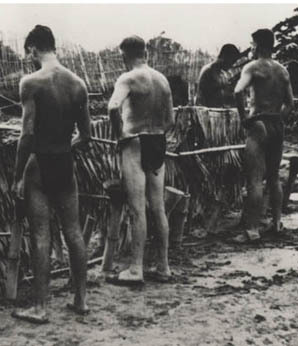 Allied prisoners of war helped to build the Burma-Thai Railway amid primitive living conditions like these. Gift of Betty Batchelor Miles.

The Japanese brought the American POWs to Burma to become slave labor for a special project. Desiring to create a more convenient route from Thailand to Burma for moving troops and raw materials, the Japanese planned to connect two railway lines in an impossibly short fifteen months. They put 61,000 Allied prisoners-of-war and over 200,000 Asian natives to work building the Burma-Thai Railway, which would stretch 250 miles between mountains, across rivers, and through jungles. American POWs in fifty-man teams cut down trees, built road beds and bridges, and laid ties and rails for the Death Railway.

Living conditions for the laborers were appalling. Each man received half a cup of bug-infested rice a day, and some POWs dropped below 80 pounds. Malnutrition brought on diseases like beri beri, pellagra, and scurvy. The tropical environment bred more cases of dysentery, plus malaria, cholera, and tropical ulcers that ate through flesh to expose the bone. Although doctors were present in the camps, they were not allowed any drugs or tools for practicing medicine. Those workers who were too slow were beaten; those who were too sick to work received no food, and were eventually sent to the notorious 80 Kilo Camp to die.

Nearly 13,000 Allied POWs and 100,000 Asian natives died building the Death Railway, including 79 men from the Houston. Upon the railway's completion in October 1943, the surviving POWs were scattered to various camps in Singapore, Burma, Indochina, and Japan, where they performed manual work for the Japanese until the war's end. On August 16, 1945, the POWs learned that the war was over. Upon their release, they were sent to hospitals in Calcutta, India and the Philippines before returning to the United States, where they reunited with their loved ones and began the process of rebuilding their lives.

A Japanese infantry sergeant gave this spoon to POW George Detre when he was captured. For many months Detre was the only person who had a utensil, and he used the spoon for 2 1/2 years. Gift of George Detre.

This spike was recovered from the site of the Burma-Thai Railway many years after the war. Nearly 13,000 Allied POWs died building the "Death Railway." Gift of Otto Schwarz.

In August 1945, POWs learned that the war was over and they were soon to be released after 3 1/2 years as prisoners of war. Gift of Mrs. Jack (Doris) Smith.

The belongings of this prisoner of war were photographed upon the release of POWs from Rat Buri, Thailand, in 1945. Gift of Eugene Wilkinson.