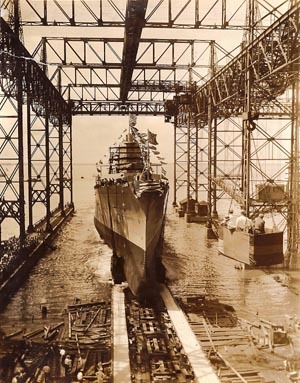 The USS Houston (CA-30) was launched on September 7, 1929 in Newport News, VA. She earned the nicknames "The Rambler" for her far-ranging travels during peacetime, and "The Galloping Ghost of the Java Coast" for her ability to evade the Japanese during the early months of the war. Gift of William A. Bernrieder.

In January 1927, a group of Houston civic leaders created the Cruiser Houston Committee, initiating a campaign to have the Navy name a new cruiser in honor of the city and port of Houston. Led by William A. Bernrieder, an assistant to mayor Oscar Holcombe, Houstonians began a letter-writing drive that flooded the office of Secretary of the Navy Curtis D. Wilbur with letters and telegrams. In response to the enthusiastic campaign, on September 7, 1927, Wilbur announced that a new heavy cruiser would be named the USS Houston.

The keel of the USS Houston was laid at the Newport News Shipbuilding and Dry Dock Company on May 1, 1928. Designed to the general specifications of a Northampton class heavy cruiser, the ship was in between the size of a battleship and a destroyer, and reinforced with light armor. She was 600 feet long, had a maximum speed of 32.7 knots, and displaced close to 10,000 tons. Her armament included three triple 8-inch gun turrets, two mounted forward and one mounted aft, four 5-inch antiaircraft guns, and various sizes of machine guns. She was also equipped with two airplane catapults and hangars that could hold four seaplanes.

On September 7, 1929, with two thousand Texans in attendance and Virginia Governor Harry F. Byrd serving as Master of Ceremonies, the ship was launched in Newport News, Virginia. In deference to the Prohibition era, ship's sponsor Elizabeth Holcombe christened the ship with a bottle of Houston Ship Channel water.

After she was commissioned on June 17, 1930, the Houston traveled to England, France, and Holland for the shakedown cruise that would get both the crew and the ship functioning efficiently. She next visited her honorary home port of Houston, Texas, where she participated in celebrations for Navy Day and the Port of Houston's birthday. The citizens of Houston presented the ship with an elaborate fifty-six piece silver service, which featured the seal of the city of Houston and the figure of Sam Houston on horseback.

In 1931, the Houston became flagship of the Asiatic Fleet and sailed for the Asiatic Station. Later that year she steamed 600 miles up the Yangtze River to assist in rescue work during a devastating flood in the Yangtze River Valley. When Japan acted aggressively against Shanghai in 1932, the Houston was called upon to deliver Marines to China to help stabilize the situation. After visiting the southern Philippines and Japan, the Houston left the Asiatic in 1933 to join the Scouting Force, based in Long Beach, California.

The Houston's most famous passenger, President Franklin D. Roosevelt, embarked on the ship for the first time in 1934. His 12,000 mile presidential cruise to Haiti, the Virgin Islands, Puerto Rico, Columbia, and Hawaii helped earn the Houston her nickname "the Rambler." FDR sailed with the Houston again in 1935, 1938, and 1939, his most notable trip being a fishing expedition to the Galapagos and other Pacific islands, which included an elaborate "King Neptune" ceremony when the ship crossed the Equator.

Other notable events for the ship during these years were the visit of Assistant Secretary of the Navy Henry L. Roosevelt in 1935, her presence at the 1937 opening of the Golden Gate Bridge, and two more trips to the city of Houston. November 1939 found the roaming ship in Pearl Harbor with the Hawaiian Detachment.

In March 1941 the Houston returned to the Asiatic, where she became the flagship for Admiral Thomas C. Hart, Commander-in-Chief of the U.S. Asiatic Fleet. The story of her brave performance in battle against the Imperial Japanese Navy, and her sinking during the March 1942 Battle of Sunda Strait are detailed in the At War section of the exhibit. In addition to earning two battle stars, the Houston and her crew were awarded the Presidential Unit citation for outstanding performance in action.

Upon hearing the news of the Houston's sinking, the citizens of Houston began organizing a campaign for a new ship to replace and honor the vessel that had been lost. By Memorial Day, 1942, Houstonians had raised $85 million through the sale of war bonds, enough to build both the light cruiser USS Houston (CL-81) and the small aircraft carrier USS San Jacinto (CVL-30).

Also on Memorial Day, 1942, 1000 Texans were sworn into the Navy to replace those who had died or were presumed dead from the USS Houston (CA-30). Following an elaborate ceremony in downtown Houston, the men boarded a train for the San Diego Naval Training Station, and were assigned to various ships following training.

On June 19, 1943, the second Cruiser Houston was launched. The USS Houston (CL-81) sailed for the Pacific in April 1944, where she took part in the invasion of the Marianas, the Battle of the Philippine Sea, and the naval assault on Formosa. Severely damaged by two torpedo hits near Formosa, only prompt action from her crew and other vessels got the USS Houston (CL-81) safely back to the United States for repairs.

Continuing the tradition of naval vessels named for Houston, Texas, on March 21, 1981, the nuclear powered submarine USS Houston (SSN-713) was launched. With a close bond to the previous ship's crews, the submarine's captain and representatives from her crew have been welcome guests at the annual USS Houston Survivors Association reunion. In 1992, the captain and crew of the submarine Houston commemorated the 50th Anniversary of the Battle of Sunda Strait by laying a wreath in the Pacific Ocean. 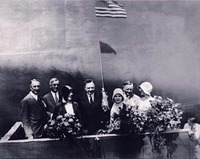 At the launching of the USS Houston, Elisabeth Holcombe, the daughter of Houston's former mayor and the ship's sponsor, broke a bottle of Houston Ship Channel water over the bow of the ship. Gift of William A. Bernrieder.

President Franklin D. Roosevelt, shown here with a Marine guard, made four voyages on the USS Houston. The ship was fitted with special elevators and handrails to accommodate the President's disability. Gift of USS Houston Survivors Association. 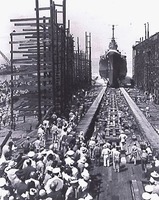 The USS Houston (CL-81) was launched on June 19, 1943 from the same Virginia shipyard as the first cruiser. Like her namesake, she earned several battle stars for her valor.

This silver service decorated with Texas motifs was presented to the ship by the citizens of Houston during her first trip to the city in 1930. The service was removed from the ship in the Philippines at the beginning of World War II and never recovered. Gift of William A. Bernrieder.