The Caucus started in 1973 as the Gay Political Coalition. Billy Walker, Chuck Berger, and Bob Osborne appeared as spokespersons before Houston City Council. Their first order of business was to establish the last week in June as Gay Pride Week in Houston, something which would not come to pass until 1979.

The Caucus proved the gay vote to be an influential vote when their vote led the charge of putting Kathy Whitmire in the mayoral seat in 1981. The Caucus experienced its biggest success in 2009, when former Caucus president Annise Parker was elected as the first openly gay mayor of Houston with Caucus endorsement.

Click on the images below for a closer look. 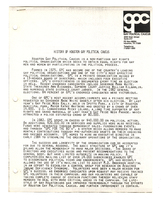 This paper details seven years of Caucus history and all the associated accomplishments. It was not a long list at the time, but it didn't need to be yet. The purpose of this paper was to represent the awareness that The Caucus had of their historical positon and how they embraced it. 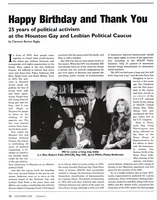 "Happy Birthday and Thank You: 25 years of political activism at the Houston Gay and Lesbian Political Caucus," by Clarence Burton Bagby, OutSmart, November 2000

OutSmart has been a staple of the Houston LGBT+ Community since the first edition came out in 1994. It keeps the community up to date about goings-on in the community as well as news that might affect them. It also celebrates great achievements in Houston's LGBT+ community history, including the twenty-fifth anniversary of the Caucus in 2000. The article on the left offers a brief overview of the history of the Caucus up to that point, and features a photograph of influential members Reverend Robert Falls, Ray Hill, Jerry Miller, and Pokey Anderson. 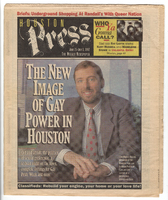 In summer 1992, Christopher Bacon appeared on the front of the weekly newspaper The Houston Press. At the time, Bacon was the president of The Caucus, and their agenda appeared with him and a number of feature articles in the paper. It was a big step forward for the LGBT+ community's political agenda to be featured on the front page in a positive light.