These are just three examples of the sort of pamphlets that were distributed to potential members of The Caucus. The Houston GLPC tri-fold brochure on the right was meant to act as a brief introduction to the Caucus and its goals. In a few simple lists, these pamphlets outline Caucus goals of voter registration, candidate screening, voter education, as well as various committees and goals.

This flyer is an example of the flyers the Caucus sends out during election season. This is a brief list informing Caucus and community members which candidates on the ballot will fight for their rights, providing them critical information on whom they should vote for. 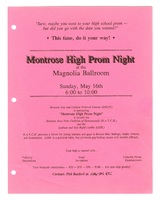 The Caucus was involved in more than just political happenings. They were also heavily involved in the community as is evident in their support of the Montrose High Prom. This flyer was sent out to various Caucus supporters and members to call for support of the Prom.

This Prom, still happening today, was organized by the Houston Area Teen Coalition of Homosexuals (HATCH). Youth across the country were often denied a prom as they were not allowed to go with the partner of their choosing. Most did not go at all, others went with someone they did not enjoy. The Montrose High Prom gave youth the opportunity to have the prom they deserved with the partner they wanted. Proceeds from this event benefited HATCH as well as the Lesbian and Gay Rights Lobby (LGRL).