One of the main functions of the Caucus has always been the screening of potential political candidates. The purpose of this screening was to discern how supportive of the LGBT+ community the candidate was. Should the candidate pass, the Caucus would endorse them.

The endorsement of the Caucus grew to be a very sought after political move. After the election of Kathy Whitmire as mayor, it became increasingly obvious how influential the Caucus endorsement was. With their endorsement came the votes of many of the Houston LGBT+ community. These votes could be enough to sway an election in the candidates' favor, if they got the endorsement.

Over the years, the Caucus has screened and endorsed a great number of candidates. This has been their main function since the beginning. 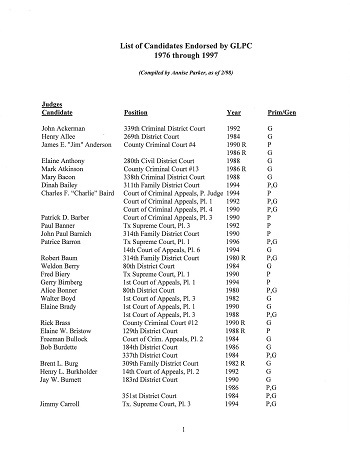 The paper on the left, compiled by Annise Parker in 1998, shows an entire list of every candidate screened by the Caucus between 1975 and 1997.

In the far left column is a list of the names of the candidates. Directly to the right of this column is another detailing what position the candidate was running for. The last two tell the year and whether they were running in the primary or general election respectively. This shows just how prolific the Caucus has been in each election since its creation in 1975. 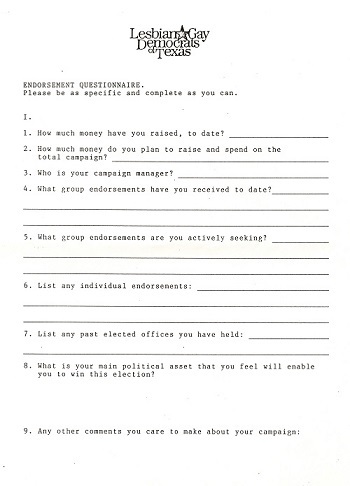 The paper on the right is an example of the questionnaire candidates would fill out in order to gain an endorsement. The questionnaire would be filled out by an interviewer based upon the responses of the candidate.