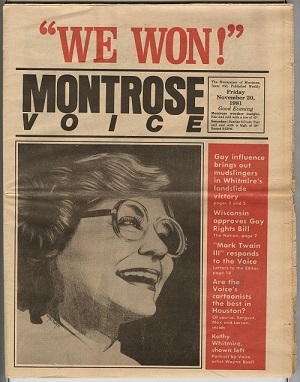 One of the earliest victories of the Caucus was the election of Houston's first female mayor, Kathy Whitmire. Whitmire was a staunch supporter of LGBT+ rights. She was a resident of Montrose, Houston's self-defined LGBT+ neighborhood. She had started her campaign by privately gaining the LGBT+ vote and support of the Caucus. 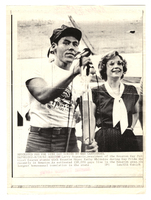 Whitmire's election came at a time when the general public was recognizing the strength of the Caucus and the LGBT+ community in the political world. Radio spots, television shows, and advertisements were taken to support the homophobic mindset of many individuals. They claimed "the gays were taking over." This talk only made Whitmire's election a bigger success for the Caucus, as it demonstrated that even under the worst circumstances, the political pull of the LGBT+ community was not to be underestimated.